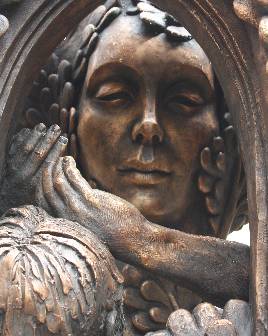 The Vision of the swineherd Eof

This bronze sculpture came about via a public art competition held by the Cotswold & Vale Magazine of Evesham. Six sculptors were shortlisted and asked to submit a maquette sculpture idea using the theme of the legend of Eof. All the proposed sculptures were then annonymously displayed in public where they could be voted upon by the local population. So the most popular design was chosen without the 'inteference of a named artist. This is a good fair method for approving a public sculpture which is to be financed by generous public donations. By far the most popular design was John McKenna's beating all the other five designs by a significant margin.

The finance has been raised for this sculpture and a site in Evesham Town centre made available for its use. John started work on this statue in early 2007 and it was installed later in the year. See below more information or http://www.statues.co.uk/eoflegendforeves.html

"Local people join forces to celebrate the Vale The Cotswold & Vale Magazine's People's Project is unique because readers chose exactly how they wanted to celebrate their area. They voted for a statue of Eof, the legendary herdsman whose vision of the Virgin Mary, whilst he was searching for a lost piglet on the wooded banks of the Avon, is said to have led to the founding of the town (Eoves ham) and the Abbey. Readers also voted for the statue they liked best, from a short list of six artists¹ visions. The chosen sculpture will be created by acclaimed artist John McKenna and erected in a prime town centre site. Townspeople will also help raise money for the bronze work of art, which it is hoped will be unveiled in 2005 to mark the 400th anniversary of the granting of the town's charter in 1605. Special fund raising events will include a sponsored walk from local villages into town for an Eof pig roast, fittingly. One fund raising book, on the history of Evesham Abbey, is already bringing in funds, and there are more books on the press, including an Abbey cook book. Meanwhile, local people are donating money, and organising their own fund-raising events." 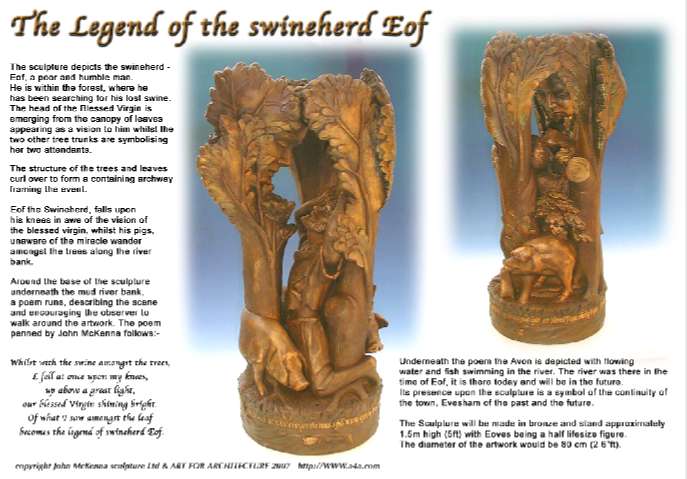 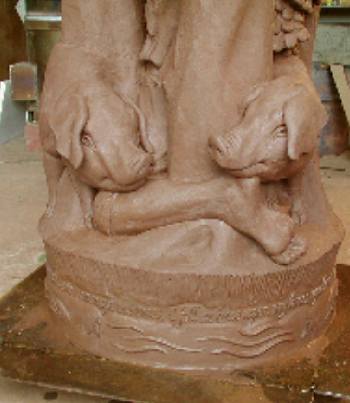 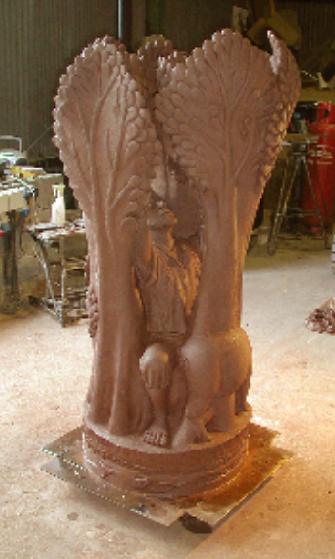 Above and right are pictures of the Eof statue in progress, the nearly finished clay stage.

From here a silicon rubber mould is made to faithfully reproduce every single detail of this complex sculpture.

From the mould waxes for bronze casting are made.