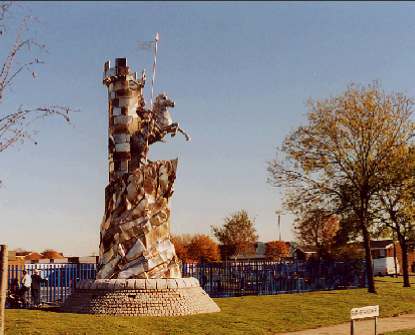 The CastleVale Housing Action Trust and SAINSBURYS held a competition for a large scale art feature to be sited near a roundabout at the entrance to Castle Vale housing estate in Birmingham.

John consulted local residents for their views on an artwork and using various themes that were favoured by the public produced a design proposal.

This was voted upon along with other artists' ideas by the CastleVale community in a public competition. John McKenna's proposal of a knight on horseback was overwhelmingly popular polling over 74% of the vote.

Above picture shows John McKenna's "Knight of the Vale" as local CastleVale residents named it. See more pictures and information on this artwork below navigation bar 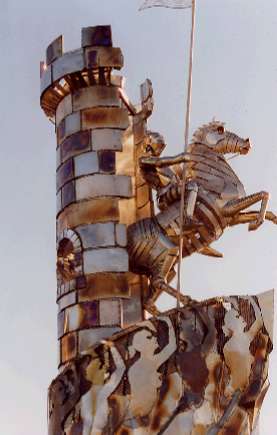 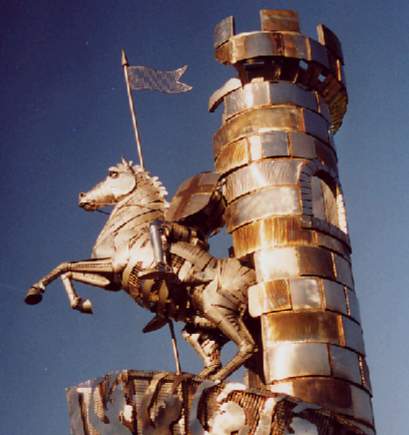 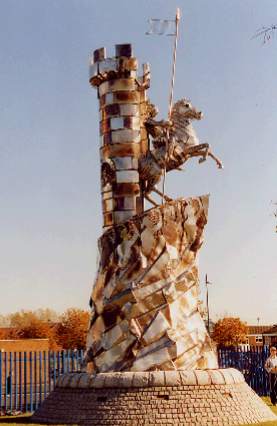 The Knight of the Vale at CastleVale, Birmingham was made entirely by John McKenna and his assistants in his studio when he was based in Worcestershire. John always insists on the highest quality workmanship and believes an artist can only achieve this by undetaking the making of an artwork himself, no matter what the scale. Only the very mundane aspects of a sculpture would be sub-contracted out, John believes he can truthfully state that his work is his work.

It was a fabricated sculpture, made wholly from stainless steel, patinated and polished to create tone in the sculpture and enhance the form. It measures over 8m or 25 ft tall.

The base of the work forms a fabricated bedrock which is the basis of the community, in the figure forms encircle the work as a pillar and support the regeneration of Castle Vale. The Knight bravely leaping out of the old CastleVale over the precipice into an unknown future.