Above pictures link to more information below the navigation bar

John McKenna and A4A art for architecture have produced many lifesize statues and portraits over the years in a variety of scales and media within budget and to project timelines.

The left panel picture links to the Stourbridge glassblower statue in cast bronze.

Far right is the 'Commuter' aluminium statue at Snowhill, Birmingham 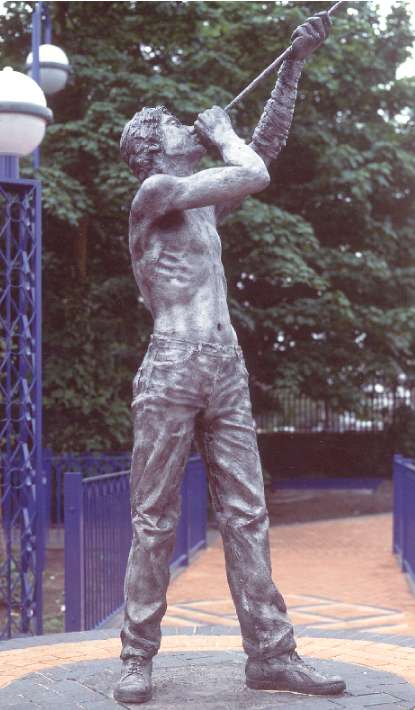 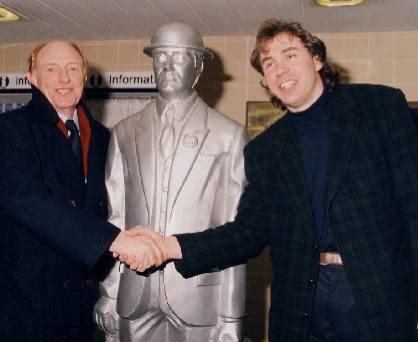 The Commuter was unveiled by Neil Kinnock MEP at the time he was European commissioner for Transport seen here with sculptor John Mckenna. The aluminium cast lifesize figure is sited at Snowhill, in Birmingham. Cast by C&J castings in Coventry.

The area is the financial district of Birmingham and the work on a humorous slant depicts a man of buisiness waiting for a train that never comes! Hence the grumpy face.

Above the Stourbridge 'Glass blower'

The triumphant stance of the glassblower aimed to celebrate the great history of hands glass blown items throughout the area of Stourbridge in the West Midlands. This work was commissioned by CENTRO for the Stourbridge Town railway station refurbishment. John McKenna produced the sculpture and Steve Field of Dudley Borough Public Art unit designed the railings and blocked paving layout around the scheme. This sculpture was originally made in GRP against the wishes of the sculptor McKenna but the client insisted on working to the budget. the GRP sculpture was produced but suffered minor vandalism almost immeadiately after installation. The client relented and acted on the Sculptors previous advice and the artwork was recastin lost wax bronze and positioned on a higher plinth. It is now considered an icon of the area and is appreciated by visitors to the train station aswell as the adjacent town bus terminus.

A lifesize statue of a young bather by John McKenna - one of his earlier works as a sculpture student at the Sir Henry Doulton School of Sculpture. The quality and skill of McKenna as a sculptor was apparent early in his studies. It was purchased by a private buyer from a London gallery exhibition. 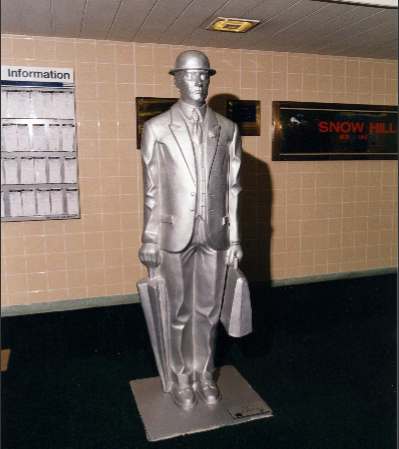