Celtic unveil statue in memory of the great Jock Stein

CELTIC Football Club is delighted to announce the unveiling of a bronze sculpture in memory of the great Jock Stein before Saturday's match with Hamilton.   Produced by sculptor John McKenna, the statue is made in bronze and weighs 450kg. It is based on a 1967 image of Jock stepping off the team bus at Celtic Park on his return from Lisbon, clutching the famous European Cup.   The granite base of the statue features the years of Jock’s life, his achievements as a Celtic player and Manager and his famous quote, 'Football without the fans is nothing'.   Dignitaries at the unveiling ceremony included Jock Stein’s grandson, John Gartland, Celtic Chairman, John Reid, former Celtic Chairman, Fergus McCann, Celtic’s greatest ever captain, Billy McNeill, and members of the Lisbon Lions, along with other former players who had played in Stein's Celtic teams.   Chairman John Reid said: “It gives the Club immense pleasure to unveil this statue in memory of the magnificent Jock Stein. 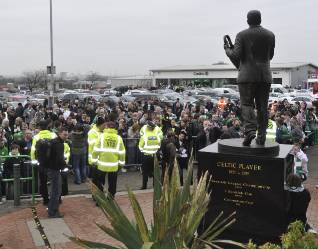 “Jock will undoubtedly be remembered as one of world football’s greatest ever managers - a man of immense stature and someone who gave so much to Celtic, Scotland and the game of football in general.   “As a player, and as a manager, when he lifted a remarkable 25 trophies, Jock Stein did the lot. Of course, to take our great club to the pinnacle of European glory in 1967 is something which will be forever the Club’s finest moment, an achievement which will always be Jock’s and always be Celtic’s.   “Already Jock’s great name graces the famous ’Celtic End’ at Celtic Park, and the board of directors felt it was important that Jock now took his rightful place at the gates of Celtic Park.   “He now stands at the steps of Paradise together with the club’s founder, Brother Walfrid, Jimmy Johnstone, the man voted Celtic’s greatest ever player and, of course, the wonderful Tommy Burns – a quartet of true Celtic greats.   "'Football is nothing without the fans' – Jock’s famous words which now adorn this statue. A statue which our fans can now come and view as they pay tribute to this brilliant man."

The statue being unveiled by the remaining members of the 1967 Celtic Lisbon Lions team with Fergus McCann, former Chairman of the club.

Below a large crowd of 500 plus gathers outside the Celtic Parkhead football stadium to watch the unveiling of the Jock Stein statue. 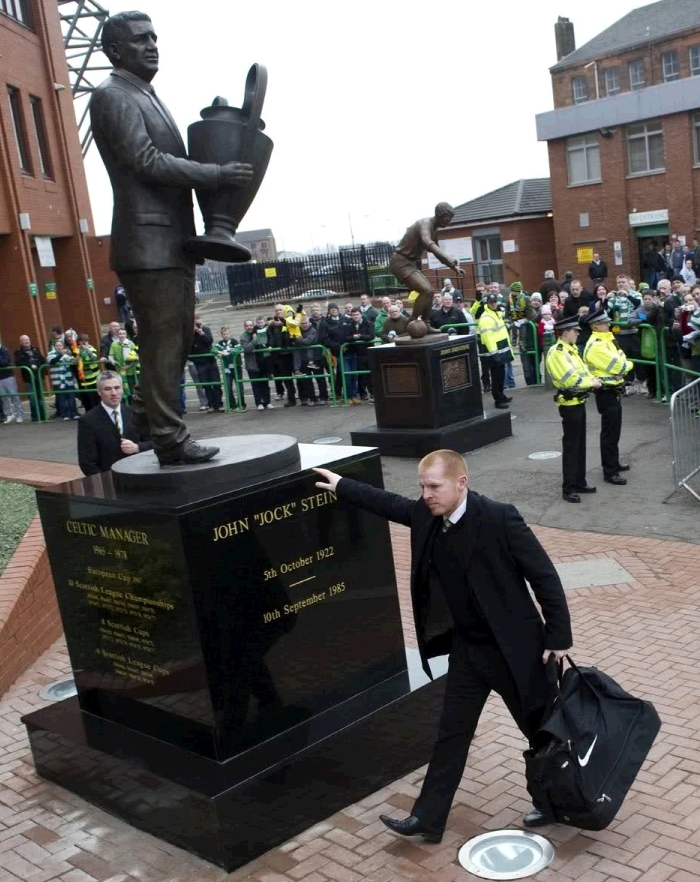 John modelled the claywork using photographic and video references, and with the help of Jock Steins son, George and Grandson John Gartland on fine tuning the portrait head. On approval of the Celtic FC board John took the work to the next stage, moulding the clay, creating the fullsize waxes, ceramic shell inveting the waxes and finally casting in bronze. John McKenna has his own bronze casting foundry, which allows him to maintain the highest quality control over the sculpture. Aided in the foundry by Claire McKenna, his assistant Peter Scott Tudhope. two sons, Alex and Thomas and daughter Lucy they cast the bronze statue using the ceramic shell casting technique. On casting the bronze statue was, fettled and finished in the studio prior to patination colouring and waxing, ready for installation. 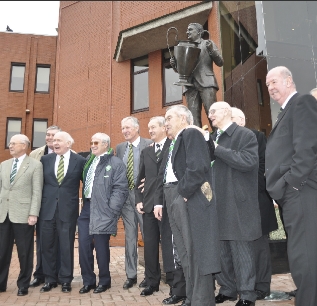 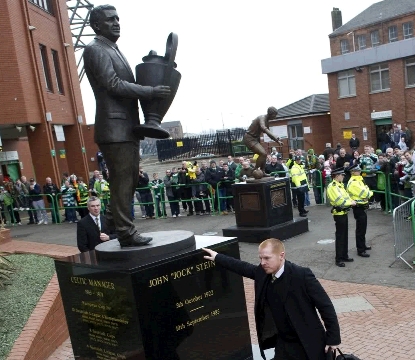 This statue was commissioned by the Celtic Football club as a centrepiece feature to the entrance of the Celtic Parkhead football stadium in Glasgow.

The over life-size statue was cast using the ceramic shell lost wax technique into bronze at the a4a bronze foundry at the John McKenna sculpture Studio.

Unveiled on the 5th March 2011, by Lord John Reid, Chairman of Celtic FC and former members of the 1967 'Lisbon Lions' Celtic team that won the European cup, read below for more details and pictures.

Celtic Football manager Neil Lennon touching the Jock Stein statue just after it was unveiled at the Parkhead Stadium. 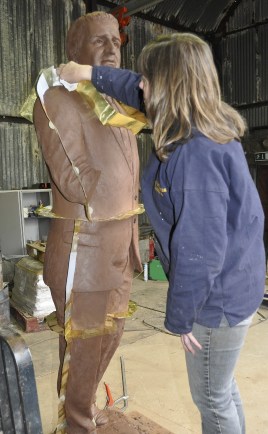 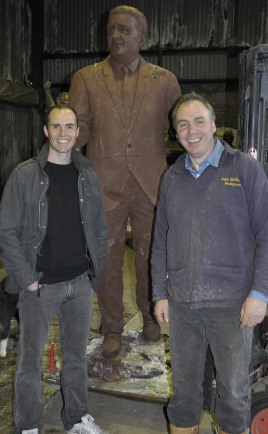 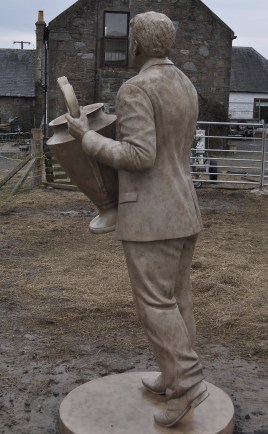 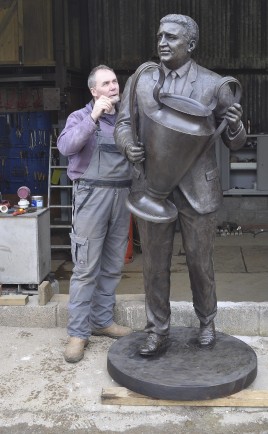